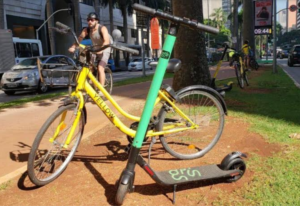 The company has stated that the purpose of the restructuring is “to continue to provide services in a stable, efficient and secure manner.”

Restructuring Grow’s business while the sharing electric scooter business is growing in the Latin American and Brazilian markets made us surprised. In this blog, we would like to discuss what this implicates.

Four essences to note in this news

2) The sharing electric scooter market has high growth potential in Brazil, but it is hindered by high operating costs.

3) Uber enters the Brazilian market at about half the price of Grow, and competition is intensifying.

4) There should be room for cooperation with local governments, which emphasized the social significance of micro mobility.

As an overview of services, they are developing a service to share bicycles and electric scooters that are dockless. It deployed 135K vehicles in seven Latin American countries and recorded 2.7 million rides in the six months from October 2018 to March 2019. Last year, we also acquired a FinTech company, so they have been working hard to strengthen our payment system.

CEO Sergio Romo worked on various M&A deals at White & Case, and subsequently founded food delivery Miorden in 2010 and sold it to SinDelantal in Spain in 2012. Since then, he has invested in about 60 early stage ventures, including Rappi, and is also a mentor for about 100 companies. He joined Grin in 2018 and, after the merger with Yellow, represented Grow.

They will stop providing services in all three cities except São Paulo, Rio de Janeiro and Curitiba, which are expected to be still profitable. They intend to support their laid off employees complying with labor laws.

According to a McKinsey survey, since 2015, investments in micro-mobility, including sharing electric scooters, have amounted to US$5.7B, of which 85% is for China. The global market is expected to reach US$300-500B by 2030 in North America, Europe and China. In the South American market, only 10% of the population has access to public transport. In Brazil, travel time in Sao Paulo and Rio de Janeiro is approximately +75% of normal travel time. As shown by these numbers, sharing electric scooters in South America and Brazil certainly play a role not only in terms of improvement in environmental destruction but also in economic loss.

The profit structure model is shown below. Assuming that the cost of purchasing an electric scooter is US$400 per vehicle and riding five times a day, the break-even point is estimated to be about four months later.

As mentioned above, Grow mentioned that the goal of the restructuring was to “continue to provide services in a stable, efficient, and secure manner”, but in fact, high operating costs also seem to be affecting.

Actually, US-based Lime, a major competitor, has raised a total of US$455M in total and the monthly top line has been steadily increasing at +20%, nevertheless repair and maintenance costs have increased and total they are in the red. This logic could be true for also Grow and other companies in the industry. As a result, Lime has decided to withdraw from the Brazilian market in just six months.

In addition, in Brazil, competition is expected to intensify as Uber announced the entry of a sharing electric scooter at the end of last year. Backed by funding and economies of scale, Uber charges on unlock for 1.5 Brazilian reals at a time, showing a clear price competitiveness against Grow’s 3 reals. In addition, they have partnered with major sporting goods stores to sell helmets to Uber scooter users at a 40% discounted price. In addition, Lime, mentioned above, has decided to withdraw from Brazil but still has a capital alliance with Uber. While the sharing electric scooter market has the potential for growth, it also suffers from double operating costs and new entrants.

Lime from the United States

In the field of sharing electric scooters, owning and operating “tangible assets” increases management costs. With little room for differentiation from the service itself, how these costs can be streamlined and minimized is likely to be the key to their survival.

In Barcelona, ​​Spain, local governments are offering a shared electric bicycle service (with dock), and the use by local citizens and tourists is increasing. Because social benefits such as congestion mitigation and environmental protection are also significant, it may be one of the strategies for each company to conduct business while involving local governments.

The 3rd Brazil-Japan Startup Forum will be held in Tokyo on February 14 (Fri).

Inviting guests from Japanese and Brazilian startups and venture capitals who were present at the Brazilian forum to talk about “Impressions of the Brazilian market, future business strategies and wins”. This is a must-see for anyone looking to enter or invest in Brazil!