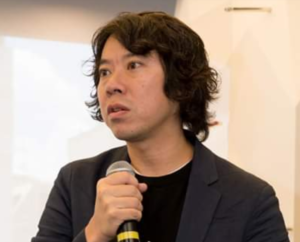 In Japan, government-led “work style reform” is being promoted, and the demand for IT infrastructure development is increasing so that anyone can work safely anytime and anywhere via the Internet.

In this session, Mr. Kawaminami, the executive officer of the investment division of HENNGE, who has been quick to address such needs, discussed the company’s history, sources of competitiveness and future prospects.

HDE, the predecessor of HENNGE, was founded in 1996 as a provider of IT solutions. Last October, the company was listed on the Tokyo Stock Exchange Mothers, and its market capitalization (public) was 21,613 million JPY. It currently employs approximately 150 people and has offices in Tokyo, Osaka, Nagoya, Fukuoka and Taipei. Major clients include Sumitomo Mitsui Banking Corporation, TV TOKYO, JR Kyushu, and other partners such as IBM. The name was changed to the current company name in February last year, and “HENNGE” has the meaning of change (Hennka) and challenge (Challenge).

Its basic philosophy is to create an efficient work environment through the release of technology, and we aim to become an IT company that can be used at the international level. The CEO Mr. Ogura said on the company’s recruiting website:

“We love IT and believe that technology makes mankind happy. Thankfully, IT has evolved at a rapid pace and our lives are becoming more convenient every day. Often you may be wondering which technology to choose and at what timing.

In this situation, what IT lovers can do for their customers is to actively eat new technologies that are immature fruits themselves, hungry several times, As they are being transported, they build up know-how about which fruits may be useful to customers or which fruits are dangerous. Based on that experience, we develop the best dish for the market and provide it to customers widely. We experience more changes and failures than any other customer, and we want to be an early adopter that keeps studying hard every day.

This concept is called “Eat unripe fruits and make mistakes early.” And is positioned at the root of corporate activities, and is positioned as the most important cycle for realizing the management philosophy of “liberation of technology”. ”

Since 2014, the official language of the company has been English, indicating the company’s awareness of global expansion.

HDE was founded in 1996, providing the Linux management software HDE Controller in 1997, the CRM software HDE Customer Care in 2000, and the HENNGE One in 2011. As the domain changes over time, the philosophy of liberating technology remains the same.

What is “HENNGE One”, a core service?

HENNGE One is a cloud-based authentication system based on Single Sign On (SSO) technology as “Identity as a Service.” Specifically, they support SaaS adopters such as Office 365 and Salesforce so that employees can always access them securely. For example, a Japanese manufacturer has introduced a certain internal backbone system (SaaS), but previously it was not possible to access from the external network, so to perform business through the system, employees had to go to the office or factory. It was a heavy burden for both employees and the company. Therefore, by introducing HENNGE One, anyone can now carry out mobile work safely anytime, anywhere. As a result, the productivity and employee satisfaction of the entire company have increased, and HENNGE One is essential scheme.

Today, it has been widely deployed across all industries, with 1.3 million users as of May 2019. They also provide security and email archiving services as peripheral functions. As SaaS development and adoption progresses, the demand for HENNGE One increases, creating a virtuous cycle.

Ordinary revenues accounted for 93.6% of sales in FY2018, compared with 54% in FY2012. Annual recurring revenue grew 134% year-over-year in 2018. This is evidence that HENNGE’s solutions are steadily attracting clients like the manufacturers mentioned in the previous section.

Going forward, the company plans to expand its business in Japan and abroad by acquiring sales leaders, developing companies with a large number of employees, and increasing profits per customer. In doing so, they will focus on developing additional features for HENNGE One, developing new businesses, and investing in startups and venture capital. While maintaining the philosophy of liberating technology, there is increasing interest in how business development “changes=hennge.”

Executive officer of the investment division of HENNGE. He joined HENNGE in 1998 as an intern while studying computer science at Waseda University. Since then, he has held management positions in the Asian business and HR department.

Thank you for your valuable and valuable lecture!

The 3rd Brazil-Japan Startup Forum will be held in Tokyo on February 14 (Fri).

Inviting guests from Japanese and Brazilian startups and venture capitals who were present at the Brazilian forum to talk about “Impressions of the Brazilian market, future business strategies and wins”. This is a must-see for anyone looking to enter or invest in Brazil!